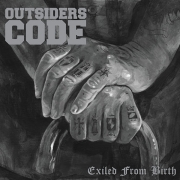 Melbourne is not known for producing weak-willed hardcore bands and Outsider’s Code is no exception. Featuring members of 50 Lions, Her Nightmare, Hitlist and Warbrain, this band means business. Consolidating an array of influences conducive to years spent in the Australian music scene, Outsiders Code emerges with an intensity of their own. Not often does such a powerful band incorporate layers of musicality and subtle guitar melody with iron grip vehemence and nail it. Outsider’s Code nails it.

Go to http://outsiderscode.bandcamp.com/ to check out a track from the album.