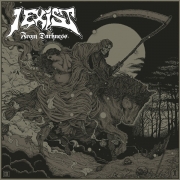 Clawing their way out of the frosty, political hellhole of Australia’s capital, Canberra sextet I Exist return with their third full length monstrosity, From Darkness, to be released on November 29 through Resist Records.

Constant touring across Australia, New Zealand, Europe and the UK has sharpened the band’s approach resulting in the expert marriage of the doom, blues and sludge flavours of 2011’s II: The Broken Passage with the ferocious blackened hardcore of their pre-history, making From Darkness the strongest I Exist release yet.

Returning to Melbourne’s Goat Sound Studios to (be abused by and) work with Blood Duster’s Jason Fuller (King Parrot, Mindsnare) and with mixing handled by Phillip Cope and Jay Matheson at The Jam Room in South Carolina (Baroness, Kylesa, Black Tusk), From Darkness swings from swaggering harmonized leads (“Sorrow On Hill 105”), vicious hardcore bursts (“Tear Down The Crucifx”) and swirling psychedelia (“Ride To Hell”).