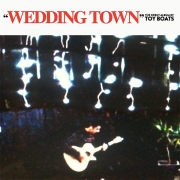 The brainchild of Byron-born prodigy Hugo Costin-Neilsen, Toy Boats sprang to life in 2009 as an acoustic-based solo deal but has blossomed into something much greater. Evidence of this can be heard on Toy Boats’ forthcoming full-length debut, Wedding Town. Set for release in April via Resist Records, it’s the sound of a precocious young talent in full bloom.

Tender indie rock that packs a powerful emotional wallop, Wedding Town is fragile yet robust, heartfelt yet headstrong, understated yet wildly adventurous. Very few debut albums can claim to strike such a harmonious balance between innocence and sophistication.

Recorded in eight days at Melbourne’s Three Phase Studios with engineer / producer Sam Johnson (A Death In The Family), Wedding Town is imbued with a rich, full-band sound that wraps the listener in warm phonics and tranquil tones.

Wedding Town is due for release April 11th via Resist Records. Costin-Neilsen has recently assembled a five-piece band to launch the album with all the splendor needed, adding second guitarist Riley McEvoy and synth player Kelly Greenhalgh.

Catch Toy Boats April 18th at The Northcote Social Club, Melbourne to immerse yourself in the album live for the first time before they set out in July with UK’s Basement on an Australian wide tour.