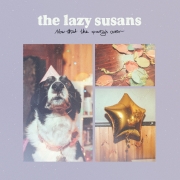 The Lazy Susan’s debut album “Now That The Party’s Over” is the before, during and aftermath of a chaotic relationship. This self reflective and emotional album explores themes of survival, self care, love and loss. Recorded, produced and mixed by Sam Johnson (Camp Cope) The Lazy Susans debut album is one filled with the darkest of emotions, but speckled throughout there is an undying hope and a want to be better.

Pre Order “Now That The Party’s Over”