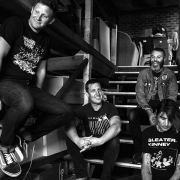 Resist Records welcomes Post Truth to its roster. Featuring ex members of The Stockholm Syndrome, Conation, Deadstare and current members of The Hard Ons, Post Truth take influence from bands such as His Hero Is Gone, High On Fire, Cursed and Old Man Gloom.

Post Truth’s “Self Titled” EP was originally released via Bandcamp in October 2017 with the band self releasing copies on a limited edition silk screened 12″. Recorded in September 2017 at the Pet Food Factory in Marrickville, Sydney with Jason Whalley, the EP captures the first 6 months of the band.