Sitting down the rung as the fifth largest city in the country and more than 700kms from the often-praised music mecca of Melbourne, the isolated surrounds of Adelaide, South Australia have proven fertile ground for hungry, pissed off musicians.

This town spawned the likes of hardcore giants Day Of Contempt and I Killed The Prom Queen: the two very bands that Cry Murder shared a stage with for their first ever show back in 2003. Maintaining the high standard of technical proficiency set by their hugely successful contemporaries, this five-piece combined a volatile stage presence and unbreakable work ethic to set about making their mark on the rest the country. Within just two years Cry Murder secured a home on Sydney’s long respected hardcore label Resist, releasing their debut EP, From The Shadow Of Doubt, in 2005.

With influences stretching from blistering modern hardcore to the precise industrial metal of Fear Factory and melodic shredding of Sweden’s Arch Enemy, they held their own, stepping up to share bigger stages with major internationals such as Bleeding Through, As I Lay Dying, Hatebreed and Converge. On national tours with Parkway Drive, I Killed The Prom Queen and Himsa, the fan base continued to swell. Under the radar of radio and media, Cry Murder traded on a reputation as a live force and steadfast belief that they would not compromise their increasingly aggressive sound. At the peak of their ability with a well-established national profile, 2009 leads us to the release of the debut full-length release, Above Us The Waves.

Once again in the trusted hands of Resist Records, their heaviest output to date is due to crash into stores and on to stages in late February/March. Tracking was completed in late 2008 at Capitalsound and Slaughterhouse Studios in their hometown with Zack Ohren (The Red Shore, All Shall Perish) handling mixing duties in his Castle Ultimate Studios, Oakland California. Finally, the mastering of this career defining work was entrusted to Swedish mastermind Goran Finnberg (Soilwork, In Flames).

On the strength of Above Us The Waves, the band retains their hard-won position as one of the country’s strongest heavy acts. They now move towards becoming one of its major exports as these crushing sounds meets the ears of new audiences worldwide. 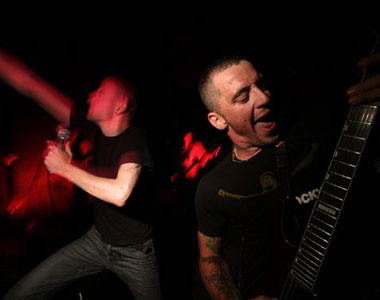