The late Nashville songwriter Harlan Howard famously defined the ingredients of a great song as “three chords and the truth”. Every songwriter knows three chords, but laying bare the truth? Now that can be an altogether trickier affair…

On January 18, 2012, The Gaslight Anthem piled into their old tour van and headed across the New Jersey state line for a 14 hour road trip to Nashville on their own quest for the truth. Their destination was 2806 Azalea Place, Nashville, Blackbird Studio, where the New Brunswick quartet had booked five weeks recording time with producer Brendan O’Brien (Bruce Springsteen, Pearl Jam, AC/DC). Their mission: to reconnect with rock ‘n’ roll in its most feral, pure, stripped-raw form.

Brian Fallon was thirteen years old when he discovered The Clash’s self-titled debut album in the racks of Sound Effects Records in Hackettstown, New Jersey: the owner of the store promised the young teenager that the record would change his life. He wasn’t wrong.

But there was a time, not so very long ago, when The Gaslight’s Anthem frontman had grown weary of the sound of electric guitars. After three albums of soulful, impassioned, hearts-on-fire punk rock – 2007′s Sink Or Swim, 2008′s The ’59 Sound and 2010′s American Slang – Fallon needed a change of pace, a change of scenery. And so, in January 2011, together with TGA guitar tech Ian Perkins, he formed The Horrible Crowes, a darkly melancholic side-project inspired by his love of The Afghan Whigs, Tom Waits and PJ Harvey. After the band’s acclaimed debut album Elsie dropped in September, Fallon joined fellow punk rock troubadours Chuck Ragan, Dan Andriano (Alkaline Trio) and Dave Hause (The Loved Ones) on the acoustic Revival Tour, airing stripped-down versions of Gaslight Anthem and Horrible Crowes songs to packed rooms across Europe. And then he returned home to New Jersey and Gaslight, re-energised, renewed and ready to make a full-tilt rock ‘n’ roll record again.

“After six weeks of that there’s nothing you want to hear more than a Marshall stack turned all the way up,” he says with a laugh.

“We’ve taken everything we do and gone to 10 with it,” says the singer. “This is definitely the Gaslight Anthem record I would want next, if I were a fan. American Slang was cool, but this sounds like a band who has plugged back into the electric socket again.”

“I think these songs are the closest thing to what we should have always sounded like,” adds guitarist Alex Rosamilia. “We just hadn’t figured out yet how to play it right.”

Fallon credits Brendan O’Brien for capturing the raw, live-off-the-floor feel of Handwritten. Fine-tuned in the living room of the small rental house the band shared in Nashville, its eleven tracks were recorded with the whole band eyeball-to-eyeball in one room at Blackbird, vibing off one another’s energy. The electricity in the recordings is tangible.

The purity of O’Brien’s stark, unadorned recording process served to inspire Fallon’s approach to the lyrical themes on Handwritten too. Where previous Gaslight Anthem albums evoked deathless images of Americana – all Cadillacs, jukeboxes, Ferris wheels and wistful, romanticised vignettes of star-struck lovers disappearing into the great wide open – Handwritten is rooted in Fallon’s own experiences, lending the record a more immediate, emotional edge. “Now I am no angel but I got nothing to hide,” the singer rasps on the brooding grunge-noir of Too Much Blood. “Can you say the same thing for yourself tonight?”

“It’s supposed to be a letter to whoever is listening,” says Fallon. “Like, this is what we got beat up by and maybe you did too. There’s so many things that I just never wrote about, real personal stuff that I just wasn’t ready to talk about yet. Now I think being an adult I have some reflection on it.”

“We wanted to look back on the music that we first found when we were in high school. The truth is, if you’re my age, you were listening to Peal Jam and Nirvana and Soundgarden. When that music came out these were guys that we could relate to. They weren’t the biggest bands in the world by accident.”

And it’s no accident either that with Handwritten, the Gaslight Anthem themselves sound built to take on the world. After years paying their dues in the punk rock underground, their major label debut is assuredly the work of a young band who know their time is now. And their laidback, charismatic frontman is ready…

“I’ve always been ready for arenas,” Brian Fallon smiles. “I’ve just been waiting for them to catch up to me. I want to play Giant Stadium, I always wanted to be a major label, major league band. If I can be the kid that’s on the cover of Time magazine, I’ll take it. And I’ll buy you a drink while I’m at it…” 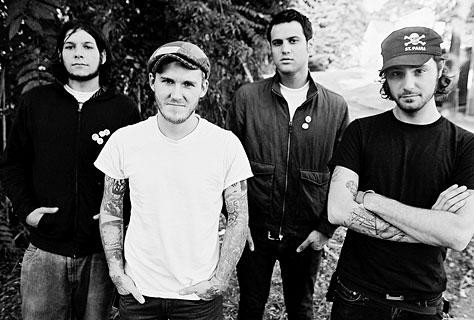