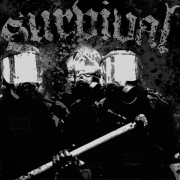 Featuring members from many established Australian hardcore bands including 50 Lions and Street Youth, in their short existence as a band, Survival have made a conscious effort to make an impact on the Australian hardcore scene. After releasing a widely praised demo, they wasted no time hitting the stage with a variety of local and international acts including Parkway Drive, Bitter End, Cruel Hand and an appearance at Hardcore 2012, earning themselves a fierce reputation for an aggressive, energetic and crushingly heavy live show.

Survival headed into the studio in late 2012 and laid down the tracks for their debut self-titled EP, out now on 7″ and iTunes.