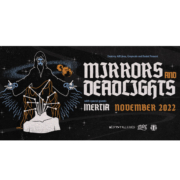 Sydney’s Vices have announced dates for their “I Am Responsible” Tour this August and September. Commencing in Brisbane on August 30, the tour will see them joined by Winsconsin’s Conveyer and Sydney’s Homesick for all shows as they visit Brisbane, Newcastle, Sydney, Wollongong, Canberra, Adelaide, Hobart and Melbourne.

Vices “I Am Responsible” Tour
with guests Conveyer and Homesick