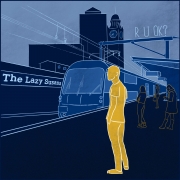 “R U OK?” will be released on February 1st and will be available on coloured vinyl 7”, Cassette and digitally.