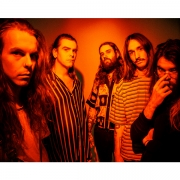 Melbourne-based, five-piece metal band Pridelands have announced the details of their highly anticipated debut studio album, Light Bends, out January 14, 2022, via Resist Records in Australia and SharpTone Records for the rest of the world.

Listen to “The Lake Of Twisted Limbs”

Watch “The Lake Of Twisted Limbs”