“I’m an amazing song-writer. Nobody can fuck with my riffs,” says Betrayed guitarist Todd Jones. Whether or not his tongue is planted firmly in his check, Jones is right. His riffs rock supremely. If there’s any band that can incite a circle pit or inspire the kids to raise their fists and mosh till they can’t mosh no more, it’s certainly Betrayed. If there’s any band that plays hardcore from the heart, it’s definitely Betrayed. Betrayed are newly signed to Equal Vision and are armed with a brand new album, the fittingly titled Substance. There’s nothing processed, homogenized, overthought, or stale about Substance. It’s got a pulse, a vibe, and a heart.

Jones effectively sums his new album up, saying, “One of the lines from the title track is ‘We search for substance,’ and it basically that means we’re not just some band looking to play the role. We don’t mimic anything. We just go for it and do our own thing.” The “own thing” he speaks of is a fast ‘n aggressive, yet melodic and catchy brand of hardcore that recalls pioneers ’80s era HxCx pioneers like Minor Threat and Dag Nasty. Betrayed put their own unique spin on the sound, and they play with all heart, all the time. Their previous releases include a self-titled record on Bridge 9 Records.

Formed in September 2004, Betrayed were an idea sprouted from the minds of Jones and vocalist Aram TK that was subsequently put into action. Friendship was definitely the catalyst for the band’s conception. “We’ve always wanted to do a band together and thought that now was the right time to do it,” Jones says of his and Aram’s decision to form Betrayed. The duo recruited drummer Todd Preboski and bassist Greg Bacon for the rhythm section, because they were good friends and amazing musicians with experience playing classic sounding hardcore. Preboski and Aram cut their teeth in Champion, while Bacon and Jones did time in Carry On. While the band enjoys an admitted long distance relationship, with Preboski in Seattle, Aram in Vancouver, and Jones and Bacon in Southern California, they remain a focused, cohesive unit. Even though the members are located in the Pacific Northwest and So Cal, respectively, Betrayed keep things in check and make it work. You need listen to Substance only once to hear evidence of the band’s tight, well-oiled musical machine.

As for the recording process for Substance, Jones wrote 4 songs before heading in to the studio, and says working with producer Kurt Ballou was an experience like no other. “Kurt Ballou is a fucking genius, straight up,” Jones says. “He helped us with structures, ideas, and writing. His mixes and sounds are as real as it gets. No big production, just raw and true but still really beefy.” Indeed, Betrayed all substance and no filler, playing songs that are rawer than an exposed nerve.

Betrayed refused to cop to any scene aesthetic and aren’t trying to win scene points that are often coveted by other here today, gone tomorrow bands. “There’s a song called ‘Work For It,’ and the lyrics are about all these fake bands in hardcore today that expect everything to be handed to them and don’t put any work into anything,” Jones says. “It pisses me off when I see bands get away with that, while better, more sincere hardcore bands are out there busting their fucking asses doing what they love and getting no bones thrown to them.” Rather than bemoan the scene that produces these types of bands, Betrayed continue to make music that reflects long-held hardcore scene ideals and values. They work hard and play hard, and put the music first, miles ahead of any look or style. Another tune, “Bring It To Life,” addresses the struggles of getting older. “As we grow older, we have friends disappear and people can be slaves to material possessions,” Jones says, offering a little insight. Another song, “I’m Not Afraid,” is Jones’s favorite, because of its lyrical content. “It’s about not being afraid to be an individual and face and confront personal issues, and bettering yourself from that and learning about yourself. I think that’s the most important song on the record and I hope people read the lyrics,” the guitarist says.

Betrayed and Substance favor fiery passion over flash, and substance over style. If there’s one thing the current hardcore scene is lacking in 2006, it’s a throbbing, beating heart that ignores image and encourages emotion. Thankfully, Betrayed are here to inject the scene and the youth of today with a much needed shot of loud, fast hardcore. 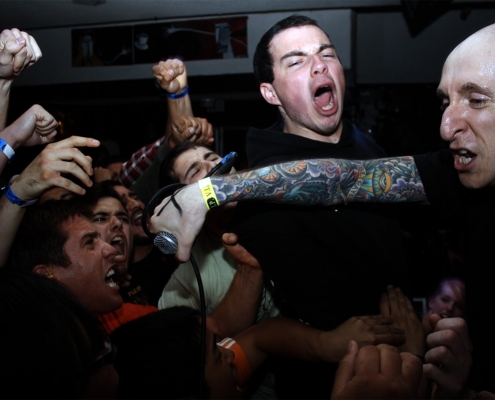