The tireless and tour-hungry hardcore loyalists in LA’s TERROR, spearheaded by the endless enthusiasm of frontman Scott Vogel, have earned quite a reputation since forming at the turn of the millennium. Their melding of no-frills breakneck hardcore and the fervor of new generation metal bridges the gap between young and old, and it makes for one hell of a pit no matter what city or stage the band leaves in ruin. Vogel has been a key figure in the scene’s survival, having given up a normal home life to slug it out on the road despite broken limbs, slipped discs and everything else that comes with hosting a TERROR show.

Century Media Records has been a long-time admirer of Vogel and the band, and the label is thrilled to now officially welcome them to its increasingly diverse worldwide roster and announce the summer release of TERROR’s third full-length, The Damned, The Shamed on June 10th. This vicious slab of brutality was produced by the renowned Zeuss (Hatebreed, Shadows Fall) and is sure to please the band’s diehard fan base, while garnering a new legion of young maniacal supporters. Be sure to stay tuned to to the Terror Myspace Page for a new track, which should be posted in the coming weeks and for their complete tour itinerary.

Vogel further comments on the newly signed deal: “After a good run with Trustkill and several cool releases TERROR felt it was time for a fresh push and to attack from a whole new angle. We are very pleased to put out our next record with Century Media. We are lucky enough to travel and tour every corner of the earth and CM has a great worldwide presence. Plus, with a back catalog of Merauder, Shadows Fall and Behemoth, we are in great company.”

As synonymous as the band has become with stellar live shows, records like Lowest of the Low, One with the Underdogs and Always the Hard Way have earned TERROR a reputation for consistency. No matter what the circumstances, Vogel has surrounded himself with talent rich in passion. A DIY attitude has often been a common bond between band members, and the current line-up is no exception. New guitarist Martin Stewart made invaluable contributions to the purist, no B.S. approach heard on Donnybrook’s Lions In This Game, Nick Jett (drums) have been with the band from the start gave Always the Hard Way an effective lumbering beat.

If anything, TERROR’s goal is to bring back the good natured release of circle pits and stage dives as well as the finger-pointing anthems that were once integral to the hardcore scene. In its infancy, the band represented everything overzealous bouncers hated, and Vogel encouraging the crowd to “elevate the maximum stagedive potential” didn’t always sit well with the LA venues they packed with sweaty kids fed-up with aimless music. Nonetheless, thanks to word of mouth and the strength of songs like “Keep Your Distance” and “What Have We Done”, the band soon found itself touring partners with everyone from As I Lay Dying to Hatebreed, amongst a slew of others. It is this drive and desire that has cemented TERROR into the hearts of music fans worldwide and made them royalty within the touring front. The fact that they’re direct support to the reunited Earth Crisis right now speaks volumes. Time off for TERROR is considered time away from their hardcore family across the globe, something that they cannot live without, so rest assured, the years to come hold many more releases and live appearances worldwide.

Rest assured that, The Damned, The Shamed is the definitive hardcore album of 2008. Consider this your only warning. 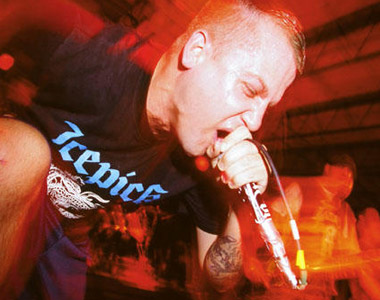