The Hope Conspiracy have been a force in the aggressive music scene since their 1999 inception.

The Hope Conspiracy began when Jonas Feinburg (ex-Harvest) began looking to start a “new” kind of hardcore band. Tired of the late 90’s approach to hardcore, he wanted to create something heavier and meaner than what the existing scene was producing. After some months of assembling a lineup (and through the suggestion of Deathwish co-owner Tre McCarthy), the band reached out to front man Kevin Baker (ex-Piecemeal). In the months that followed a demo was recorded and The Hope Conspiracy was born.

The band quickly took to the road, completing their first U.S. tour with Converge in 1999. Soon after they signed a deal with Equal Vision and released their “Cold Blue” album on the label in 2000. The Hope Conspiracy also reissued their demo recordings as the “File 03” CD/7″EP on Bridge 9. For the next two years they took to the road supporting these releases.

In 2002, The Hope Conspiracy released their “Endnote” album on Equal Vision. That year also saw The Hope Conspiracy contribute to the “Dead Man’s Hand” split 7″EP series on Deathwish, teaming up with The Suicide File from Boston. Yet again, they toured the world for another year, quickly becoming one of the leading bands of the metallic hardcore genre.

After a European tour with Nine in 2003, citing lineup stability issues, The Hope Conspiracy went on hiatus. During the break, Kevin Baker began fronting The Bars, a band he started with former American Nightmare/Give Up The Ghost guitarist Tim Cossar. The Bars released their self titled album on Equal Vision in 2004. During this break, Jonas took the position of live sound engineer with Bleeding Through, a position he still holds today.

In 2005 and after almost two years of silence, The Hope Conspiracy awoke from their slumber. Instead of attempting to be a full time band or hodgepodge of former members, they decided to include all available former members in the band. Their goal was to exist on their own terms, write and tour when they wanted, and simply be a group of friends that played exciting music together.

The Hope Conspiracy “Hang Your Cross” 7″EP and “Death Knows Your Name” CD were both released on Deathwish in 2006.

The recording session was engineered by Kurt Ballou (Converge) at Godcity Studios. These releases marked the first recorded appearance of Tim Cossar (American Nightmare, Bars) with the band, as well as the return of guitarist Neeraj Kane (The Suicide File, “Cold Blue” era guitarist) back to the song writing fold.

The “Hang Your Cross” 7″EP was released to reintroduce the band to an eager public, and it worked. Thru direct sale in the Deathwish Estore, the band sold 2000 copies of this stellar release. The release opened the doors for the band to return to form with “Death Knows Your Name” album, a stark and mesmerising chapter in The Hope Conspiracy legacy. From the haunting first notes of “They Know Not”, to the earth shaking “Stolen Days”, the unforgiving heaviness and rage of the album is awe inspiring. The album received praise from music press worldwide, reaffirming the band’s place in aggressive music history as one of the scenes greatest bands.

Recorded by engineer by Kurt Ballou at God City Studios, “True Nihilist” is The Hope Conspiracy’s latest, and possibly greatest, recorded effort to date. From the first seconds of opener “In The Shadow Of God”, it is apparent that something wicked has awoken. With a rhythm section sounding like the beating heart of an animal about to pounce on its tender prey, the electricity they collectively create hangs in the air throughout the release. Making hairs stand on end before bursting out with their now trademark rage and intensity. Shockingly violent, this inhuman pace continues through the next ripper “Greed Taught…”, until the epic closer “Dismal Tide” crashes down as emotional debris from the fury. All in all, the three masterful tracks that make up “True Nihilist” are The Hope Conspiracy in true form, truly untamable. Silencing the naysayers, this beast is back.

The Hope Conspiracy continue to write and perform on their own terms. 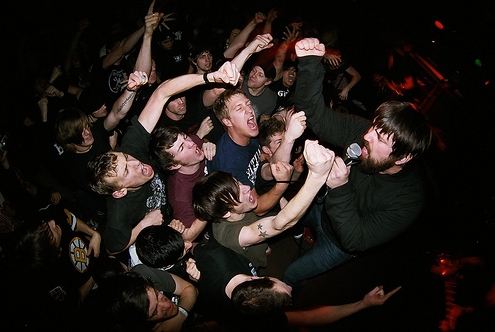