Comprised of some notorious individuals from Sydney and beyond, Vigilante have injected the Australian hardcore punk scene with a much needed boost of classic New York hardcore inspired jams with a significant dose of social justice messaging. Reinforced by members who served time in hardcore bands dating back to the mid 90s including Urban Mayhem, Right Idea, The Deadwalk, Last Nerve, Bad Blood and Ill Brigade, Vigilante embody a once infamous Sydney hardcore style. Hard not heavy.

After releasing a 6 song demo in 2010, Vigilante’s stubborn song-writing approach and attention to detail saw them return to the studio to record with Australian folk-rock musician Jonathan Boulet for their debut 12″ EP “Quality Of Life”. After sitting on a well received demo for two years, “Quality Of Life” has further developed their identity and exposed more influences, such as their re-recording of Altercation’s “Vigilante Song”. A tight approach to production and an attitude to match has helped create an urgent sense of social commentary fuelled rage.

In a time where conformity is dominating an arguably contradicting hardcore punk scene, “Quality Of Life” is full of personality, dynamic riffs and an honest perspective on social justice issues. Songs like “Search For Truth” and “Fear Of Change” showcase Vigilante’s approach and interpretation of a classic sound of hardcore spawned from the mid 80s. A tried and tested formula that Vigilante embrace and believe because they do things their way. 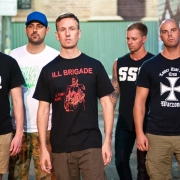