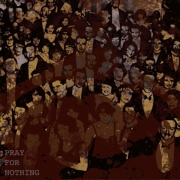 Now a staple in Australian and International hardcore, 50 Lions first bared their claws in 2005 at the height of the metalcore craze in their native Byron Bay. Focussing on producing a more traditional hardcore sound, they soon released a 7” and in 2007 their debut album, Time Is The Enemy followed by a split with Down To Nothing, a self titled 7? and their 2nd album Where Life Expires. Pray For Nothing is the bands return from a brief hiatus featuring 3 new tracks, in stores March 1.