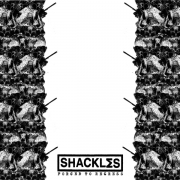 Northern New South Wales tyrants of drear and isolation, Shackles, are a dark reminder that hard work often pays off. Stacking up a hefty catalogue of releases across the vinyl and tape formats in barely two years, prolific may be one word to describe the group; ferocious, vulgar, and barbaric may be others.

Combining elements of the late 80’s Californian Powerviolence scene with the early 90’s Death Metal/Grindcore movement as well as a few contemporary influences, the band have built one of the more unique approaches to hardcore to emerge from the region. With a solid touring regime funded entirely by the band themselves there is no denying Shackles are one of Australia’s hardest working young bands and you should expect much more from them over the next year.

Listen to “Blood And Bone” here