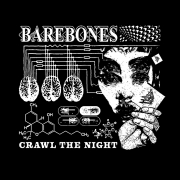 Sydney punk rockers, Bare Bones, are back with their brand new single ‘Crawl The Night’, the first offering of new music since their debut album Bad Habits was released in May of 2017.

The band will be launching their single in both Sydney at Oxford Art Factory Gallery on Friday August 9 and Melbourne at Last Chance Rock N Roll Bar on Saturday August 10. Tickets on sale now.

Listen to “Crawl The Night”