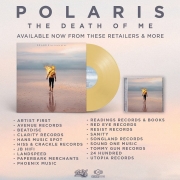 Polaris new album “The Death Of Me” is out now on CD, LP and digital outlets.

Returning to the familiar surrounds of a rental house in the small South Coast town of Mollymook where they recorded The Mortal Coil, converting it into a temporary studio, the band was accompanied by their Front Of House sound engineer, Lance Prenc, and longtime friend Scott Simpson (Alpha Wolf), both of whom co-produced the album with the band, with it being mixed and mastered by Carson Slovak and Grant McFarland at Think Loud Studios Pennsylvania.

Listen to The Death Of Me