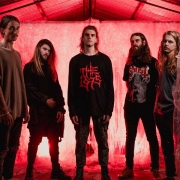 Heavy both instrumentally and in terms of its message, this song shines a harsh spotlight on the corruption and mismanagement of the devastating bushfires that raged through Australia from 2019 to 2020.

“Lyrically, the new single is at heart, a song about corruption in our home country of Australia, both from its inception to the current day. The track highlights tones of inequity, ranging from parliamentary ignorance, to the lack of indigenous cultural teaching in our education systems, to gender inequality. Too many of Australia’s inhabitants “graduate” from their places of education without learning a single thing of the culture, rituals and environmental preservation tactics that the First Nation’s peoples carved the way for so many years prior to the white man’s invasion of this land.”